How to Block a Coworker

Any team member can choose to block the incoming direct messages from any other team member or admin-- for any reason, and for any length of time.

What will the person who set the block see?

The person who has set the block (let's call that person Jenny) won’t receive any notifications of one-on-one messages from the blocked person (let's say, Chris), and any direct messages Chris sends will go directly to the Archived section of Jenny's Chats tab. Jenny will still receive any messages from groups of which Chris is also a member. She will also see a note under Chris's name in the Coworkers tab as a reminder that he is blocked, and it can also be seen on Chris's Profile screen.

What will the blocked coworker see?

The blocked coworker, Chris, whether or not they’re an admin, will not see any indication that they’ve been blocked, either in one-on-one messages or group messages.

There are several ways to set a message block

How to Block From Message Details

How to Block From the Coworkers Tab

How to Block From a Coworker’s Profile Screen

How to Unblock a Coworker

If/when Jenny decides to lift the block, any of the three paths described above for blocking—Message Details, Coworkers tab or Profile screen— can be used. Jenny could also tap on any blocked and archived messages from Chris and choose the “Unblock” option at that step. 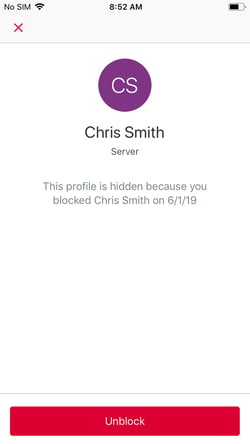 You can unblock a coworker from their Profile screen, as well as in a message or from the Coworkers tab

If Jenny needs to send a direct message to Chris, the block must be cancelled (even if temporarily). The option to “Unblock” will automatically appear if a message is initiated, and will need to be confirmed. 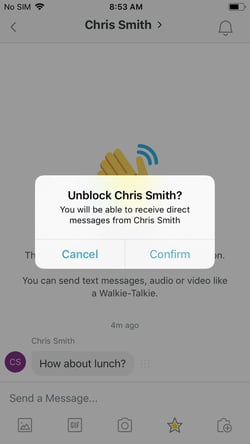 If you want to send a direct message to someone you’ve blocked, you’ll need to unblock them